A CYCLEWAY ALONG THE HIGH ROAD: WHAT DOES THE DATA SAY? 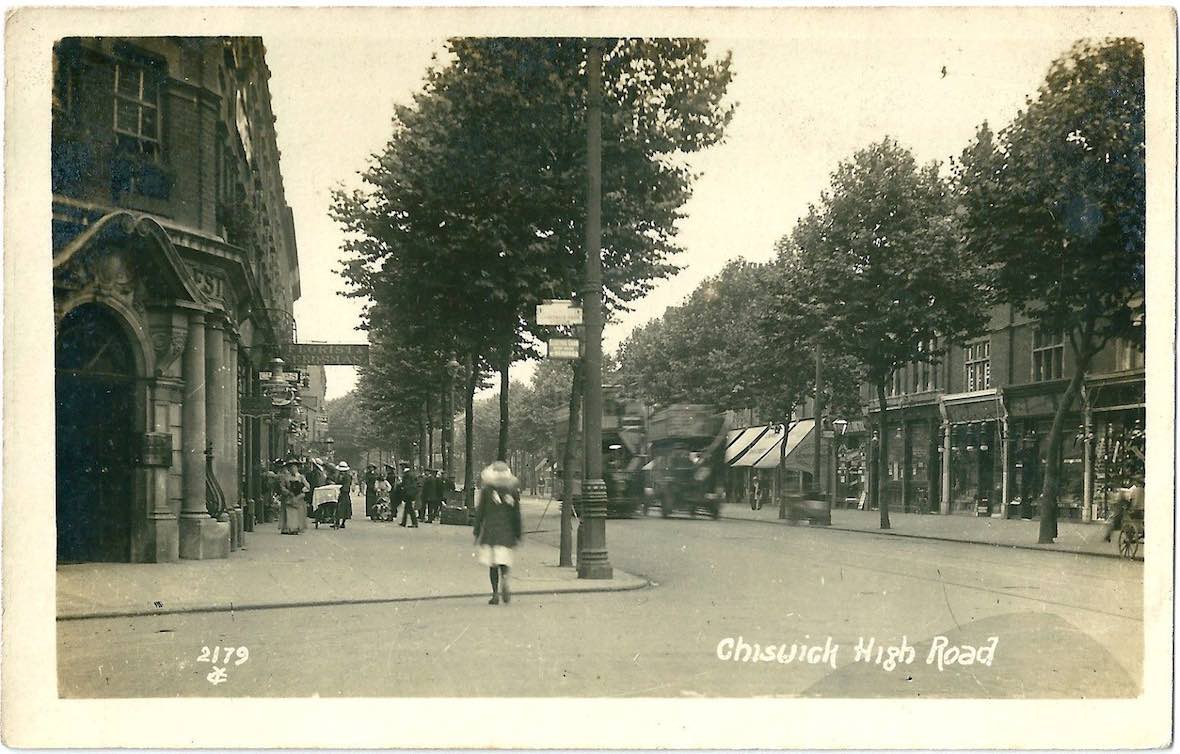 Opponents of building segregated cycle lanes argue they lead to increased pollution and damage businesses. We now have data from around London to see if such claims stand up to scrutiny, and what we might expect from building CW9 along the High Road.

Looking first at the effect on pollution, we have roadside measurements of various pollutants collected for many years. In particular we have data from alongside the route of CSEW, the cycleway along the Embankment and through the City to Tower Hill. The pollution has been monitored nearly continuously for eight years before the cycleway was built and more than three years after it opened in April 2016. Two pollutants can be tracked, fine particles known as PM10’s, and the gas nitrogen dioxide, NO2. Both are associated with lung damage and reduced life expectancy.

While vehicles are the primary source of these pollutants, the weather also plays a part in how they spread. It is therefore necessary to have additional measurements further away from the road so that the pollution levels from passing traffic can be separated from shifts in the background. For this purpose PM10 and NO2 are monitored at St John Cass School in the City.

Below is plotted the concentration of these two pollutants, measured on Upper Thames Street and Walbrook Wharf alongside CSEW, with the background subtracted.

Both show a very similar pattern with pollution levels dropping after the cycleway was opened. PM10’s counts dropped from 16.9 to 9.7, or 43%, while NO2 counts fell from 35.8 to 27.1, or by 25%. The reason for this drop is clear. Peak motor traffic along this route has fallen since the segregated cycleway was opened. The number of cyclists stepped up, overtaking the number of motor vehicles: 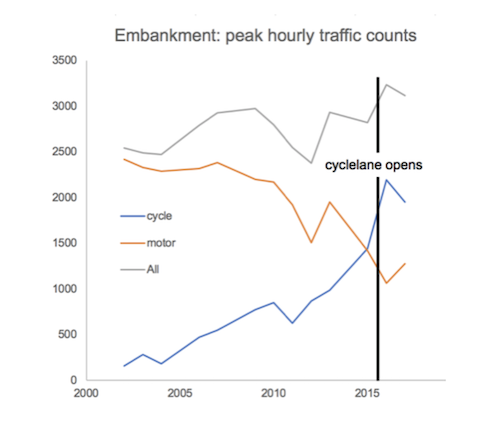 Overall, the number of vehicles, including bikes, travelling along the Embankment is higher after the cycleway was opened, peaking at more than 3000 an hour. The data from CSEW along Embankment and through the City is not surprising. Fewer motor vehicles leads to lower pollution levels, but with segregated cycle lanes the capacity at peak times is higher than ever.

The damage to retail from segregated cycle lanes is often based on anecdotal evidence. In comparison, a commonly used objective measure of the health of a high street is the proportion of empty shops. However, comparing the change before and after a cycleway is built won’t just reflect any shift due to the cycleway. Underlying changes such as the growth of shopping online will also play a part. Like pollution, it is necessary to correct background shifts which are unconnected to the introduction of a cycleway.

As part of the “Little Hollands” project in Enfield, cycleways were built along both sides of Green Lanes through Winchmore Hill. Some shopkeepers have complained about the effects of the new cycle lanes. However, comparing the number of empty premises for the 44 shops on either side of Winchmore Broadway before and after the cycleways were opened, Google Streetview shows the number of empty shops fell from 2 to 1 between September 2015 and May 2018. For the nearest comparable period on the south side of Chiswick High Road, the number of empty shops increased from 2 to 6. Shopkeepers in Chiswick have clearly faced a number of challenges that have proved more damaging than the new cycleway in Winchmore Hill.

Chiswick High Road, back to the future?

The High Road has already changed radically since shops first lined its pavements at the end of the nineteenth century. This scene (at the top of this page and below) from before the First World War shows thriving retail, wider, tree-lined pavements than we currently enjoy and a quieter, less congested High Road with no cars. Scores of trees have been removed and the wide pavements lost to motor traffic. We now have a noisier, more polluted and more dangerous High Road, hardly recognisable in comparison.

Looking at the available data, the CW9 cycleway along the High Road will allow us to recapture some of what we have lost, giving us back a cleaner, quieter and less congested High Road. We can’t turn back the clock, but in one hundred years time future residents of Chiswick will see that we were the ones who started to move the High Road in a better direction. 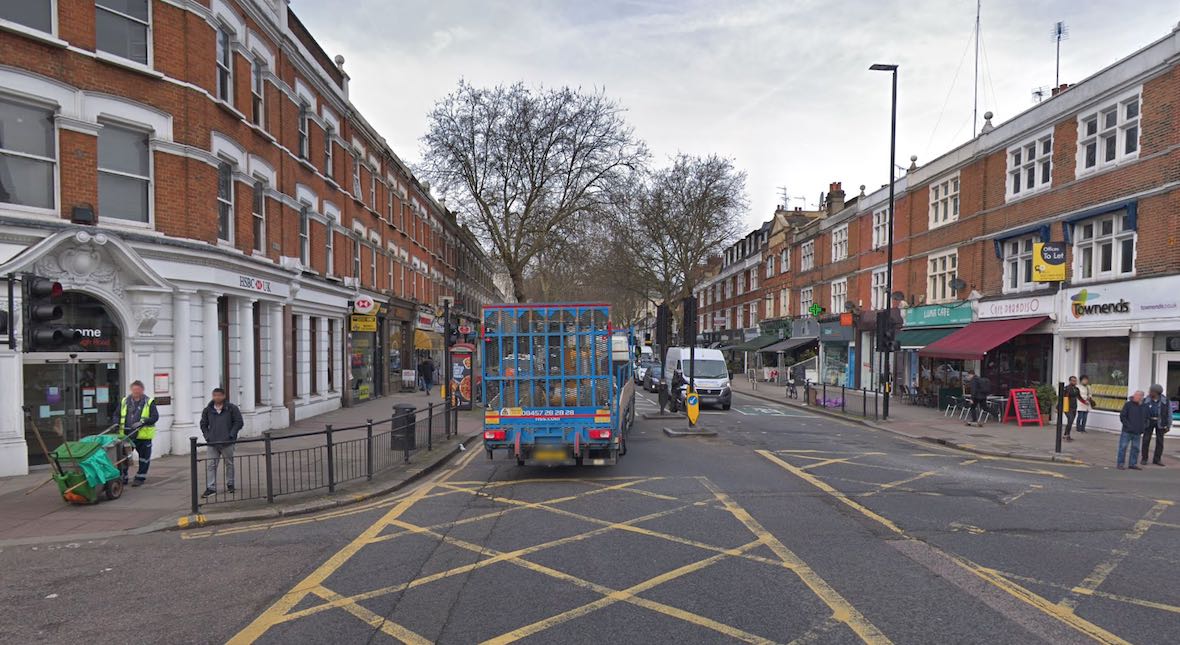