PLANS FOR THE A4 / EALING ROAD JUNCTION 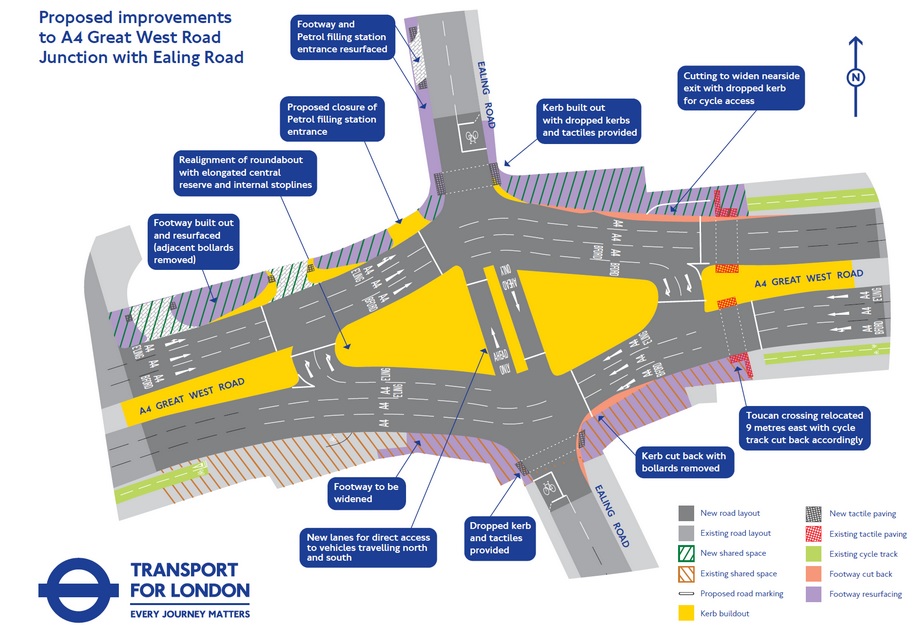 This is one of the worst junctions on the A4 in LB Hounslow for pedestrians and cyclists. There are no crossing facilities provided across Ealing Road, not even a dropped kerb. The original A4 cycle track has been completely removed.

The proposals have completely the wrong priorities. TfL are more concerned with upgrading the traffic lights and not delaying motorists rather than providing safe crossings for vulnerable road users, which should be a priority given the major new housing developments at the junction. It is not acceptable to say you will think about this later.

The proposals go against the welcome trend across London of removing gyratory systems and creating more pedestrian and cyclist friendly junctions, turning a roundabout into a mini-gyratory system. Perhaps a simple signalled crossroads would work better, as they do at other junctions on the A4.

The only positive aspect of the proposals is the closure of the petrol station access which is currently dangerously positioned on the roundabout.

The proposed shared use footways either side of Ealing Road provide a very low level of service to both pedestrians and cyclists. The London Mayor’s Cycling Vision heralded an end to “confusing shared use pavements” – why are they still being proposed by TfL at every junction upgrade? The proposals go against the 2015 London Cycling Design Standards:

We would support the proposed straightening of the existing toucan crossing of the A4 if proper feeder cycle tracks are provided either side to enable cyclists to conveniently and safely cross the A4 and turn on and off it to/from Ealing Road. Noting para. 5.2.5 of the LCDS, the toucan should be upgraded to a parallel pedestrian and cycle crossing. A similar second crossing should be provided on the west arm of the junction for northbound cyclists on Ealing Road.

Even with the above provision for Ealing Road cyclists it is likely that many cyclists heading north-south would use the proposed carriageway lanes across the ’roundabout’ island. These should therefore be a minimum 4.5 metres wide to allow larger vehicles to overtake slower cyclists safely.

Unless high quality cycle tracks and crossings are provided, some cyclists will continue to use the carriageway, which would be made more dangerous by the proposed gyratory system, with higher speeds and more lane changes required.

We strongly urge TfL to reconsider this scheme and develop an upgrade programme for the A4 cycle track throughout LB Hounslow, making it continuous across junctions, with proper signalled crossings.

More information about Transport for London’s plans for this junction