Soon, I hope, we will hear the response from TfL to the consultation about the plans for the segregated bike path on Chiswick High Road. We’ve been waiting over a year, and I am nervously anticipating good news.

We’ve heard a good deal of claptrap about how segregated bike paths destroy communities, which anyone who has ever been to Copenhagen or The Netherlands will know is utter nonsense.

Two weeks ago, a local man, aged 58, was cycling along the High Road. It’s a journey he does over 500 times a year. He was in the current on-road painted bike lane next to the wide pavement, a few metres away from the spot where the proposed bike path would be. Then suddenly a driver coming the other direction turned right and hit him with his car, throwing him violently onto the hard road. The cyclist was concussed, with an injured and possibly broken shoulder, a laceration an eighth of an inch from one of his eyes and bad bruising. He was shaken up. You can see a picture taken after the collision by a person on a bus that arrived shortly afterwards. 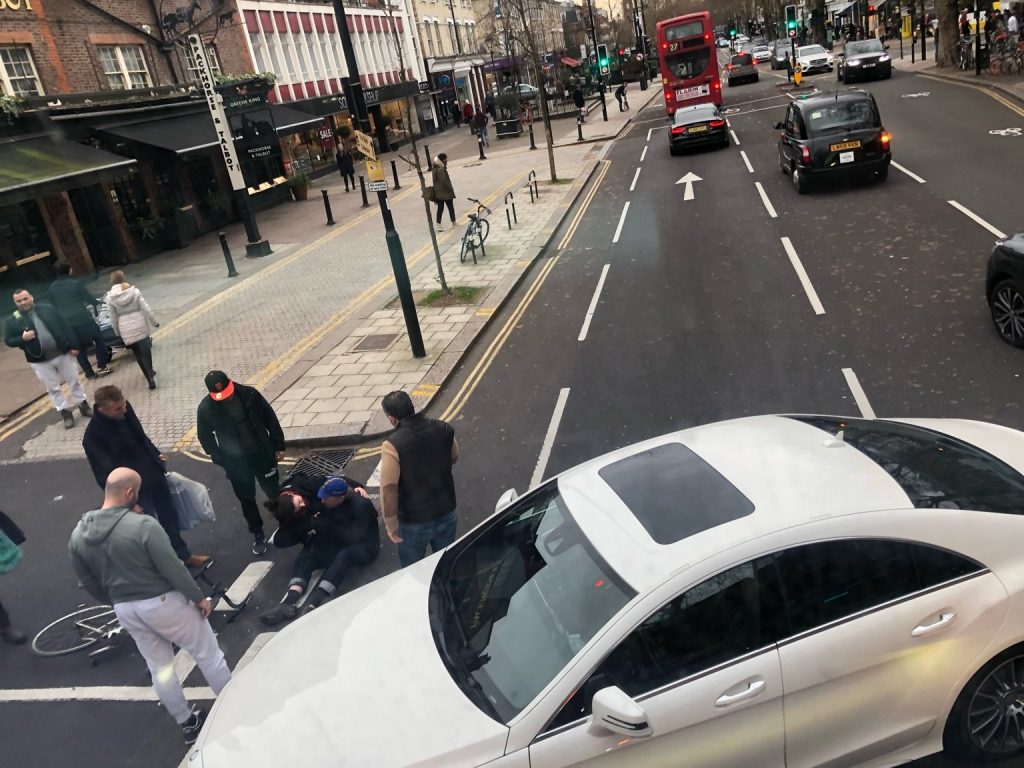 I looked at all casualty reports recorded or attended by police along Chiswick High Road for a 12-year period between 2005 to 2017 (known as STATS19 forms). They are collated and publicly available and searchable by location over the whole of London (see link below). I selected Chiswick High Road and extracted the numbers of casualties, including people who were seriously injured or killed.

Who are the casualties?

Cyclists are by far the biggest group of casualties. In 12 years, 162 people were injured whilst cycling on Chiswick High Road, with 14 people sustaining serious injuries.

The High Road has by far the highest number of cyclist casualties of any part of Chiswick. In fact 53% of ALL cyclists injured in Chiswick were injured on Chiswick High Road. (162 of 307)

Ninety-five pedestrians were injured on the High Road. Twenty sustained serious injuries and one person was killed (by a lorry). One hundred-and-one car occupants were injured including 3 seriously.

We also hear a lot about ‘dangerous cyclists’ from opponents of the bike path. One of our councillors for example even stated that cyclists in Chiswick cycle at 20mph on pavements. I wanted to quantify the risk posed to pedestrians by cyclists, so I looked in more detail at every individual police report for 12 years of pedestrian casualties to find out how many were actually hurt by bikes.

How were pedestrians hurt? Sixty-five were hit by cars or taxis, 10 by vans, 7 by buses, coaches or minibuses and 6 by motorcycles.

Five pedestrians were injured after being hit by cyclists at a rate of one approximately every two and a half years. None of the pedestrian-cyclist collisions were on pavements.

It staggers me that anyone with humanity could look at the casualty statistics and flatly oppose a scheme designed to do something about it.