Feltham plan: Local plan for west of the borough 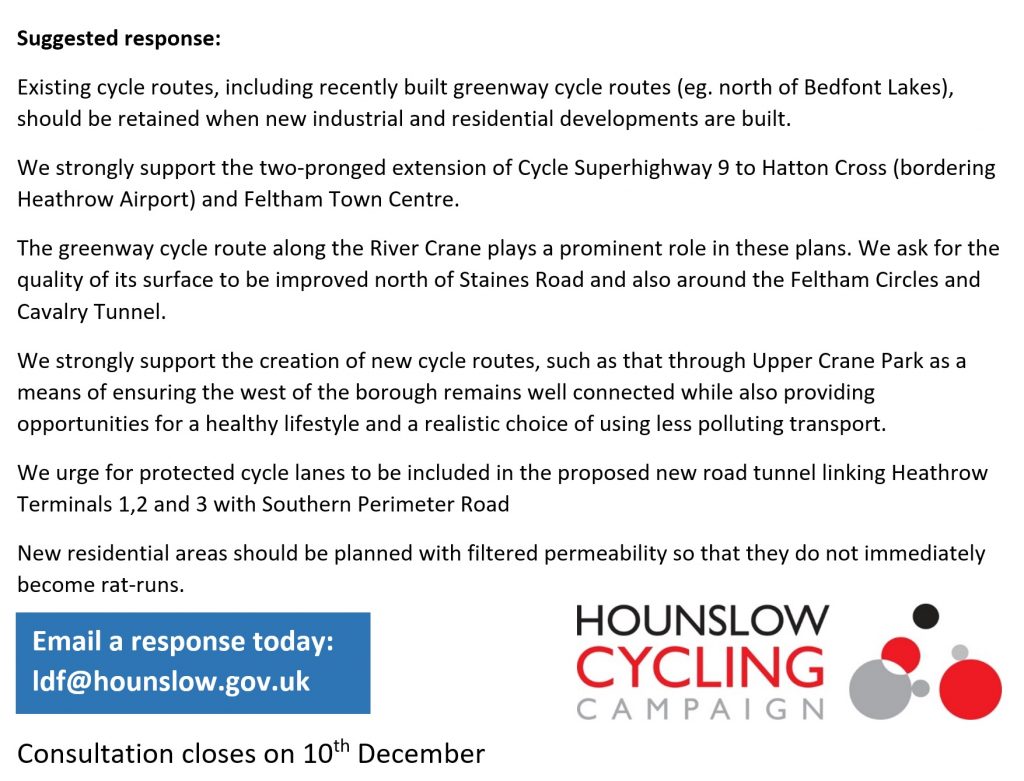 Hounslow Council are consulting on a broad-brush plan for the area around Feltham.

The wider London Plan requires that at least 9000 additional homes and 12,000 new jobs be delivered in the “Hounslow Opportunity Area”. There are plans for new urban quarters in Bedfont: Heathrow Garden City, Bedfont Lakes Neighbourhood and Airport business Park. Hounslow Council claim that these plans have been developed to try and tackle health inequalities and promote healthy living. Hounslow Council recognise that several areas are poorly served by public transport and that many areas lack safe cycle access and are difficult to navigate on foot.

Incredibly, the most deprived men in Hounslow can expect to live on average 6.3 years lower than those who are the least deprived and the most deprived women can expect to live 4.3 years lower than the least deprived. Air quality is poor in the area and the Hounslow Joint Strategic Needs Assessment 2017 states that there is a link between poor air and noise quality to health. Long-term exposure can contribute to development of chronic diseases and increased risk of respiratory illness.

A 2015 physical activity needs assessment showed that Hounslow borough had the highest level of inactivity in London.

Providing top quality cycle routes in these plans would be a way of improving the health of residents and reducing dependency on transport that pollutes our air.

There are local concerns over loss of greenbelt, although the council claims that a “Habitats Regulation Assessment” is being carried out in accordance with the Habitats Directive. The council is recommending reclassifying a large portion of the greenbelt as Metropolitan Open Land.

The plans are short on detail, but there are some clear statements of intent to provide new cycle routes:

“Creating well-defined streets and spaces with a network of safe and easily navigable pedestrian and cycle routes through the site to connect to Hatton Cross underground station the Crane River Corridor, the Duke of Northumberland’s River and associated open spaces and East Bedfont via the bridge at Richmond Avenue”. 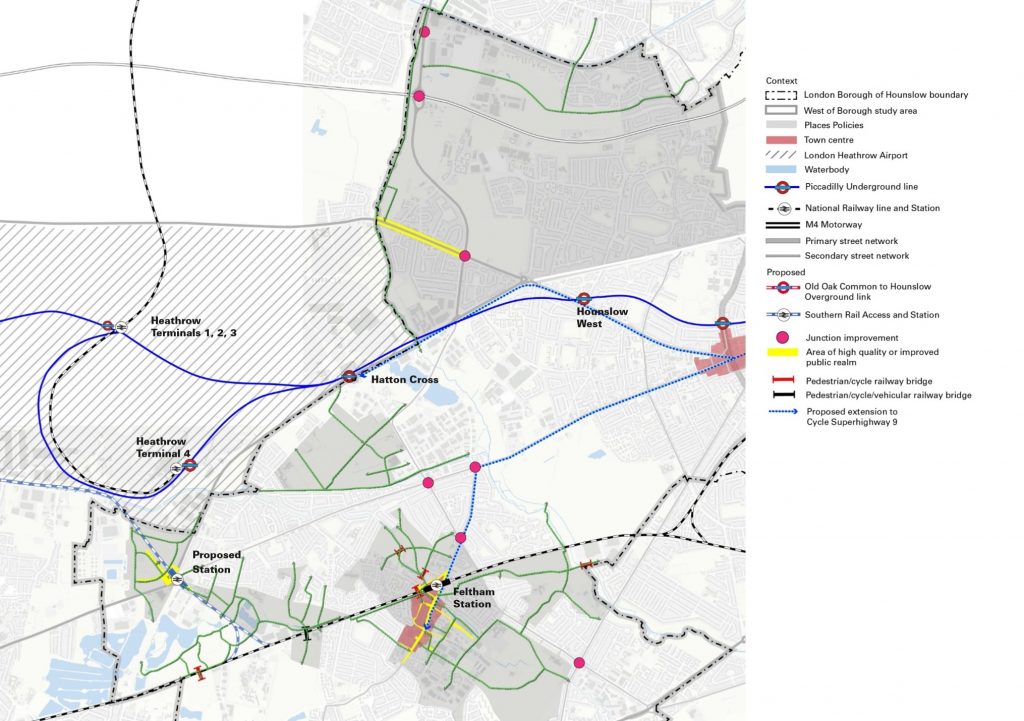 Plans for Feltham town centre show a new cycle route through Feltham marshalling yards (labelled upper crane park), presumably joining up with the existing greenway through De Brome fields, which connects with the greenway to Twickenham, along the River Crane. 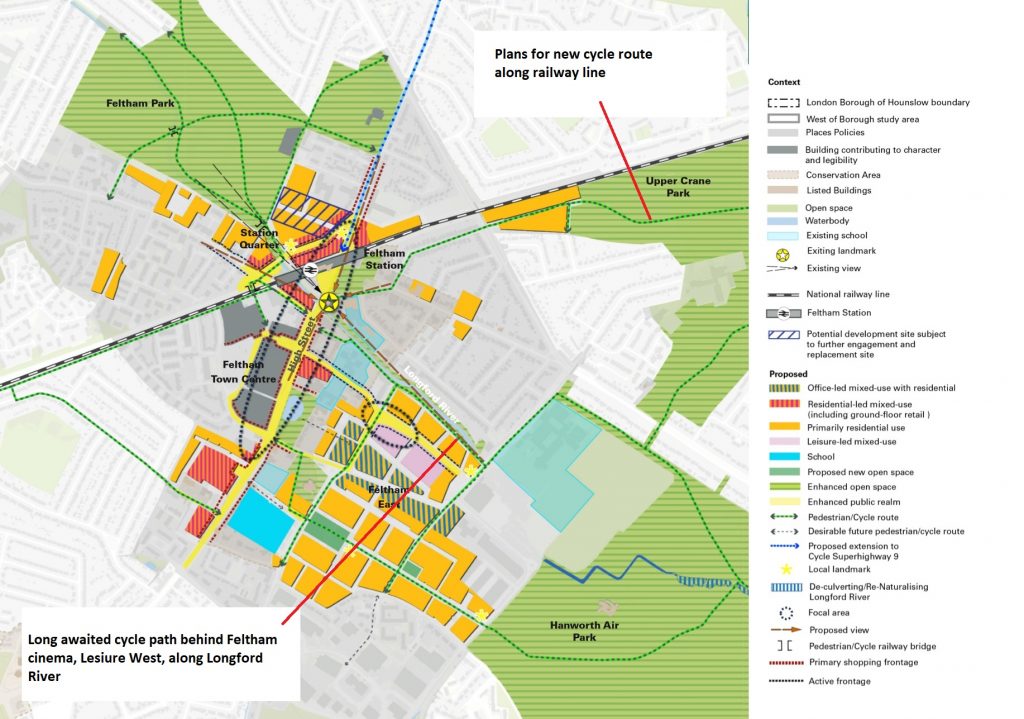 Plans for new cycle routes behind Hounslow Urban farm. It is not clear how they will pass round Hatton Road and Sixt car hire to reach Hatton Cross. 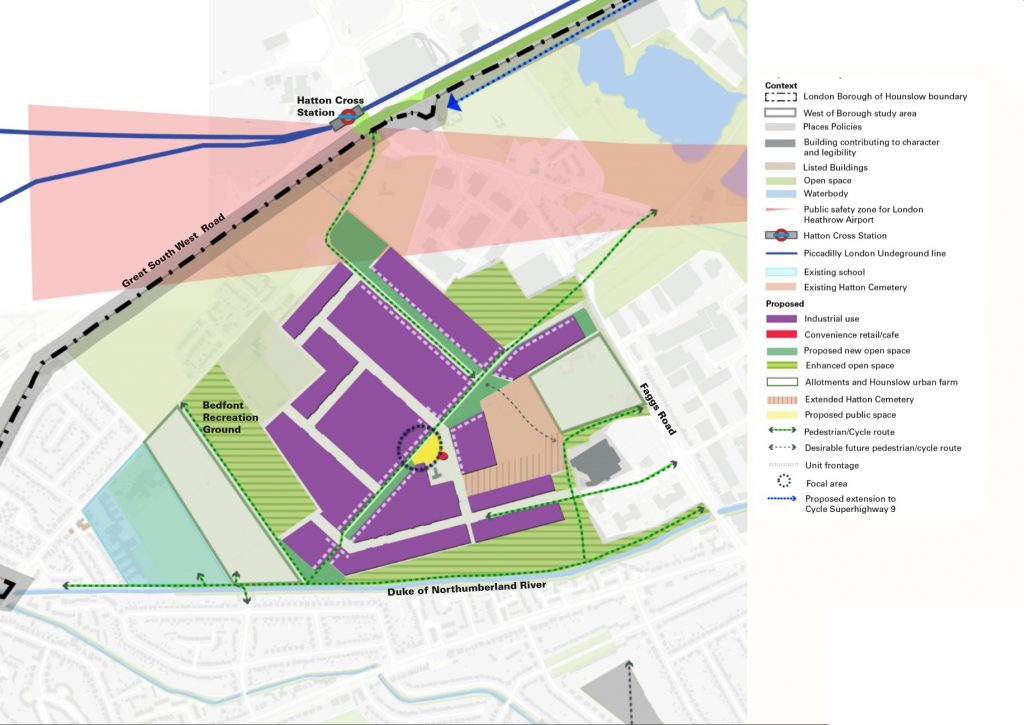 The greenway cycle route along the River Crane plays a prominent role in these plans. We ask for the quality of its surface to be improved north of Staines Road and also around the Feltham Circles and Cavalry Tunnel.

We strongly support the creation of new cycle routes, such as that through Upper Crane Park as a means of ensuring the west of the borough remains well connected while also providing opportunities for a healthy lifestyle and a realistic choice of using less polluting transport.

We urge for protected cycle lanes to be included in the proposed new road tunnel linking Heathrow Terminals 1,2 and 3 with Southern Perimeter Road

New residential areas should be planned with filtered permeability so that they do not immediately become rat-runs.