Consultation for new cycle routes across the railway & through Feltham

Hounslow Council are consulting on plans to close the level crossing in Feltham (in order to get longer trains) and to build a new cycle access bridge linking to a ramp in a park next to New Road and a more utilitarian ramp from Bedfont Lane at the back of The Centre.

Are there alternative options?

Here is a pedestrian/cycle underpass being installed in Goshen College, USA:

If a tunnel cannot be built, why not make the existing road bridge safe for cycling?

Investing in cycling infrastructure on Feltham Rail bridge was included in Hounslow borough’s mini-holland bid, in the 2013-2050 Local Plan and in the Skycle proposal backed by Heathrow. It is strange that now investment in the bridge looks as though it will happen, why no investment in protected cycle lanes on it is planned. Instead of providing protected space for cycling, an extra lane is planned for cars. Hounslow borough is already breaking air pollution limits, so the idea of making more space for cars is incredible.

Additional pavements are planned for pedestrians. This is an opportunity to link the bridge pavements to the paths around Bridge House Pond to make a more pleasant route to Cardinal Road schools.

If a tunnel is really not possible, there are a number of improvements that can be made to the plans as proposed. Bikes can’t do right-angled bends very easily so there will need to be plenty of space to turn from the ramps onto the bridge. Clearly it will be important that the new bridge is wide enough to cycle past people who are walking.

Given this is a key route for people traveling by bike, consideration also needs to be given to protecting cyclists from lorries visiting ASDA Feltham and providing a protected cycle route near MacDonald’s.

The creation of the green ramp and the removal of the bus stops at New Road provides an opportunity to increase bike parking for the rail station.

At present, the council are not proposing any cycling infrastructure on the road bridge over the railway, despite widening it to add pavements and an extra lane of motor vehicles, so it is really important that any cycle bridge is easy to use.

The current level crossing is reasonably convenient for cycling so it is important that these changes do not put people off making journeys by bike. 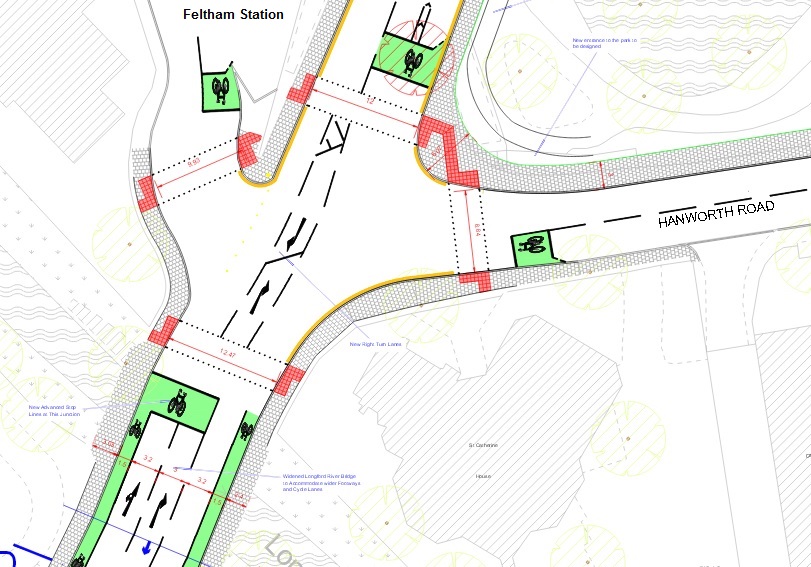 Plans for the junction where Feltham High Street meets the rail station, the rail bridge and Hanworth Road.

For people who cycle in and out of the southern side of the railway station, it will be important that priority at the traffic lights is clear, especially for people leaving the railway station car park and cycling down Hanworth Road. The plan is to widen the bridge over the Longworth River and put in 1.5m wide cycle lanes. The southbound cycle lane could and should be physically separated from the car lane.

Giving people on bikes their own traffic light phase would arguably make cycling to the rail station much more attractive which in turn would alleviate the parking issues arising from people leaving their cars on Feltham’s streets while they catch the train. 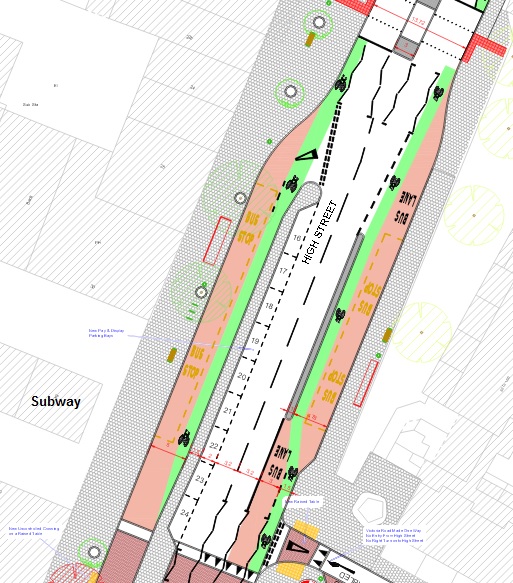 The plan is to widen the bus lane further south along the High Street. With the width available, a better option would be to build cycle lanes that are bus stop bypasses ie that go behind the bus shelter. This would avoid the cross-over painted on the road. 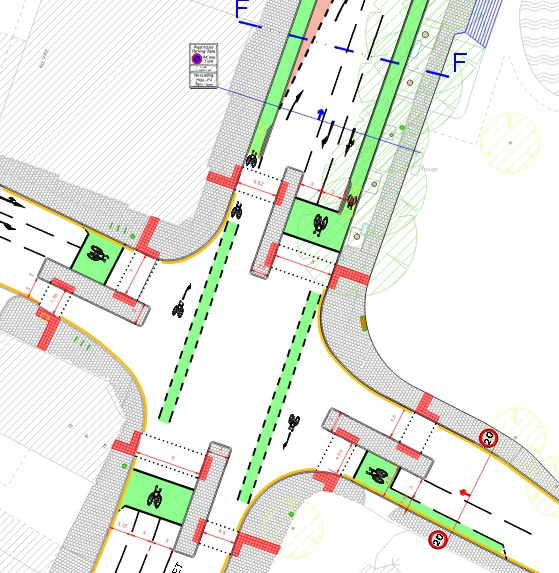 Do we really need three lanes of cars on Feltham High street near Tescos?

A two-stage right turn is proposed where the High Street meets Browells Lane. (When turning right, rather than moving into the centre of the road, these designs encourage cylists to follow two sides of a square).This junction design offers very little protection for people cycling out of Highfield Road and turning right to go south down the High Street.

The Dutch have developed two-stage right turn junctions into a fine art but their junctions offer much greater protection for people on bikes. 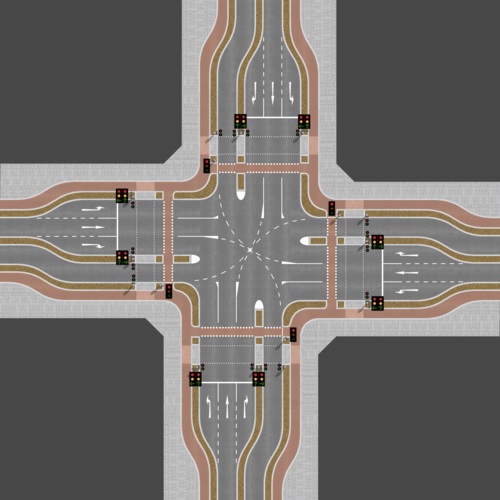 The best option for people travelling by bike across cross-roads at Browells Lane, at Feltham Station and in many other places would be a Simultaneous Green junction. Do you like it?