Hounslow Cycling members cannot support the Grove Park Piazza scheme as a standalone proposal. We would, however, support it (with minor modifications) as part of a bolder overall scheme that significantly reduced the volume of traffic crossing Grove Park Bridge. 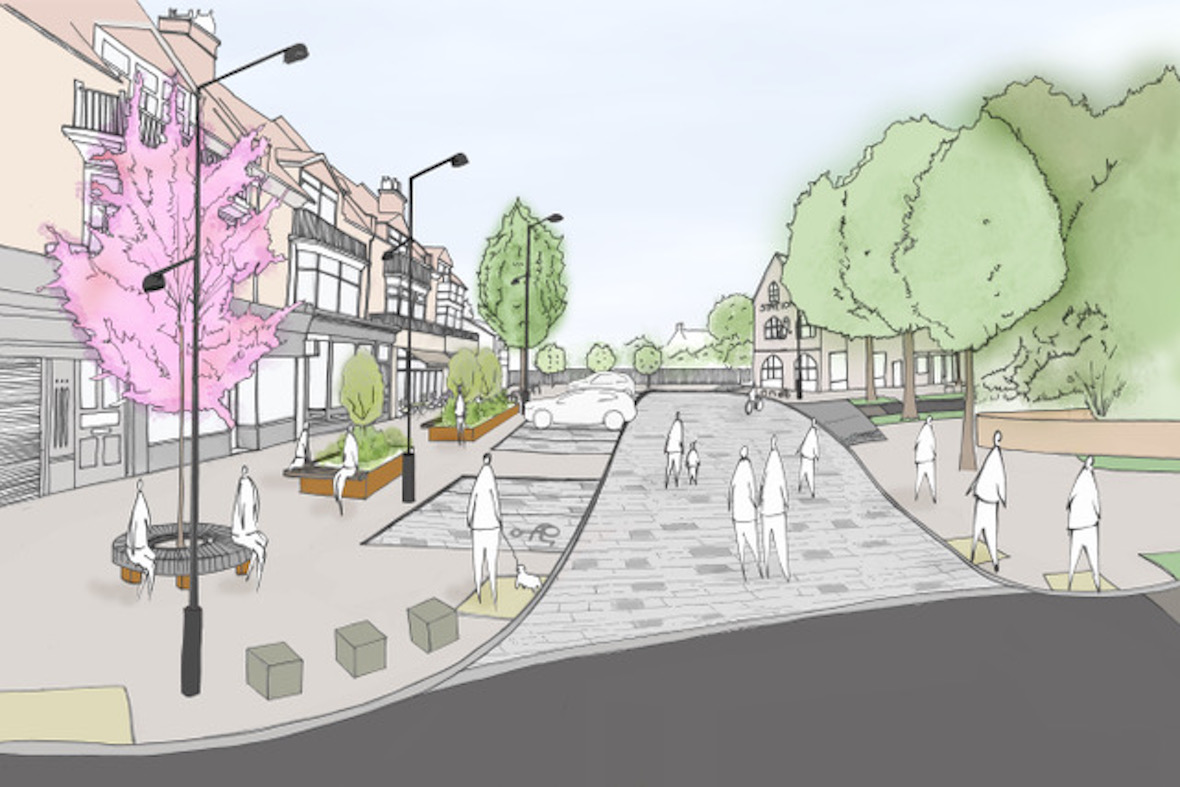 We welcome the reduction in car parking spaces and the improved management of those spaces. The proportion of shoppers using cars should reduce over time, in line with the Mayor’s vision, but there will always be some who cannot reasonably be expected to adopt active travel or public transport.

We like the new trees and greenery, and the other design details that are illustrated in the consultation document. These will materially improve an area that currently feels rather like a car park.

We like the deep pavement in front of the parade of shops. This will keep traffic noise and fumes away from the shoppers and create potential space for the coffee drinkers.

High volumes of traffic speed through Cavendish Road, Bolton Road and Grove Park Bridge to get from/to the A316 to/from the A4. We believe that the design as proposed will make the rat run more attractive by smoothing out the route for through traffic. That will make the area more dangerous to pedestrians and cyclists and so, of course, less attractive. Pedestrian access to the Piazza from the West (Grove Park Road and Grove Park Gardens) will be particularly unappealing.

The proposal was originally developed with existing travel habits in mind rather than the new habits that the Mayor and Borough are trying to foster. Some forward-looking improvements have been incorporated (e.g. the inclusion of charging points for electric vehicles) but these seem timid. Most seriously, it appears that the number of parking spaces is intended to be sufficient to support current levels of short term parking. This is incompatible with the Mayor’s vision of greater use of active travel and public transport.

We feel that the piazza is unlikely to become a focal point for the community without better provision for families and children. We suggest that the three EV parking bays are moved to Spencer Road, freeing up a quiet corner of the Piazza for a play area and benches.

Could the kerb line to the West of the Old Station House be remodelled to create a geo-fenced Mobike parking zone next to the loading bay? Mobikes clutter up the pavements, which is an irritation to most pedestrians and a hazard to some.

We believe that vehicle traffic to/from Spencer Road through the Piazza could be reduced, while maintaining egress for the 272 bus. This should be considered along with low traffic measures for Bolton Road.

We accept that the Council cannot unilaterally block the access for cars along Station Approach Road. LCC Infrastructure has, however, advised us that a similar problem was resolved at Aubrey Road, E17 with the collaboration of private landowners.

The Liveable Neighbourhoods project consists of a range of schemes that aim to increase the number of trips made by foot, bike and public transport, while improving public space. It is not clear how this proposal fits with the other schemes in the project.

On the one hand, this proposal would not contribute to the overarching aim of the Liveable Neighbourhood as a standalone scheme. It is too timid and cosmetic, in itself, to materially change anyone’s travel habits.

On the other hand, we know that the Borough will be bringing forward other schemes to address the issues of rat run traffic more directly. This design would work very well in conjunction with a modal filter on Cavendish Road or an ANPR bus gate on Grove Park Bridge.

Would the Council confirm that consultation on all schemes in the project will be completed before a final decision is made?

Hounslow Cycling is the borough group of the London Cycling Campaign. We campaign for better cycling facilities in the borough, offer training, rides and generally provide a focus for those interested in cycling locally.