The Chiswick councillors have followed their erroneous leaflet with an equally erroneous press release. 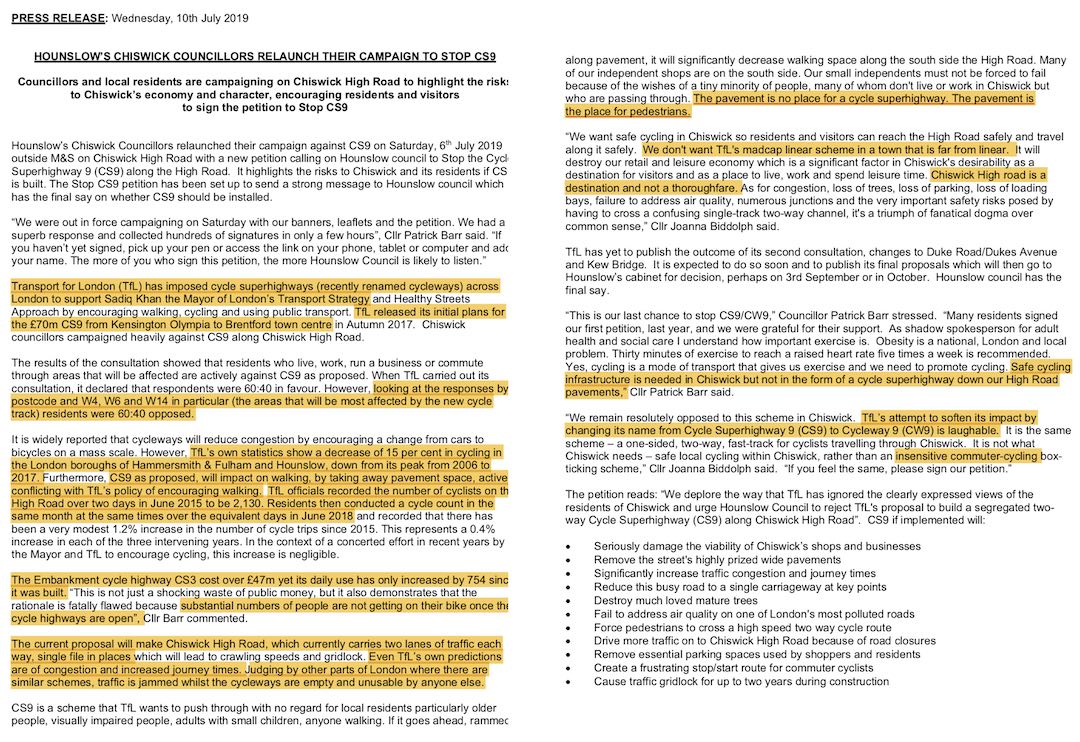 Here is a point-by-point rebuttal.

What the councillors say vs. The reality

The reality: The Cycle Superhighway programme, including CS9, was launched on 18 May 2009 by the then Mayor of London, Boris Johnson.

A Conservative/independent coalition was in control of the London Borough of Hounslow at this time.

The cycle route programme was part of Mayor Johnson’s Transport Strategy and this has been adopted by the current mayor.

They say: “TfL released its initial plans for the £70m CS9 from Kensington Olympia to Brentford town centre”

The reality: This is factually incorrect. The scope of the £70M project covers a cycle lane between Olympia and Hounslow town centre.

They say: “looking at the responses by postcode and W4, W6 and W14 in particular (the areas that will be most affected by the new cycle track) residents were 60:40 opposed.”

The reality: Excluding the views of people who do not live in W4, W6 and W14 excludes the opinions of Cllrs Barr and Biddolph, who live in TW8 and W3 respectively.

All who use the route should have their voice heard, because their life is at stake when cycling or breathing polluted air from motor traffic.

They say: “CS9 as proposed, will impact on walking, by taking away pavement space, actively conflicting with TfL’s policy of encouraging walking.”

The reality: Living Streets, the UK charity for everyday walking, strongly supported the CS9 plans because of the overall benefits for people walking.

After CW9 Chiswick High Road will still have the maximum score for walking space in the Healthy Streets scorecard. (Peak pedestrian flows on S side of CHR are <600 per hour)

They say: “TfL’s own statistics show a decrease of 15 per cent in cycling in the London boroughs of Hammersmith & Fulham and Hounslow, down from its peak from 2006 to 2017.”

The reality: The councillors have not provided a reference for this claim so it cannot be verified and is contradicted by DfT data for cycle growth which shows 88% increase in Chiswick from 2009 to 2018.

They say: “TfL officials recorded the number of cyclists on the High Road over two days in June 2015 to be 2,130. Residents then conducted a cycle count in the same month at the same times over the equivalent days in June 2018”

The reality: The councillors have not provided a source for either of these claims so they cannot be verified. We understand the residents conducting the cycle count were part of the anti-cycling group, Re-Do CS9.

They say: “The Embankment cycle highway CS3 cost over £47m yet its daily use has only increased by 754 since it was built.”

The reality: The councillors have not provided a source for this claim and it is contradicted by TfL Traffic Counts showing 200% increase in use since it was built.

They say: “substantial numbers of people are not getting on their bike once the cycle highways are open”

The reality: This is factually incorrect. TfL data shows substantial growth in new cycling infrastructure once it is open.

They say: “The current proposal will make Chiswick High Road, which currently carries two lanes of traffic each way, single file in places”

The reality: This is factually incorrect. Chiswick High Road is already single file in places.

The changes are a result of requests from the initial consultation to use road space rather than pavement space.

They say: “Even TfL’s own predictions are of congestion and increased journey times.”

The reality: This is factually incorrect. TfL traffic modelling shows a decrease in journey times for PM and eastbound AM.

“Judging by other parts of London where there are similar schemes, traffic is jammed whilst the cycleways are empty and unusable by anyone else.”

This is an anecdote, not evidence. The central London cycleways move 5 times more people per square metre than the roadways.

They say: “We don’t want TfL’s madcap linear scheme in a town that is far from linear.”

The reality: The A315 (Chiswick High Road) is the road with by far and away the highest volume of cyclists in the area and a poor record for cyclists being injured in collisions with motor vehicles. It is entirely logical to provide protected cycling infrastructure along this route.

Other programmes will provide local cycling infrastructure linking with CW9. It is disappointing that the Chiswick councillors did not say what they wanted in the borough transport strategy and did not support a borough bid for Liveable Neighbourhoods funding.

They say: “Chiswick High road is a destination and not a thoroughfare.”

The reality: Unfortunately Chiswick High Road is a thoroughfare for motor vehicles.

They say: “Safe cycling infrastructure is needed in Chiswick but not in the form of a cycle superhighway down our High Road pavements.”

The reality: The councillors appear to be confused about the design of the CW9 cycle lane given it isn’t on pavements.

They say: “TfL’s attempt to soften its impact by changing its name from Cycle Superhighway 9 (CS9) to Cycleway 9 (CW9) is laughable.”

The reality: The change in name was recommended by the cross-party GLA Transport Committee, chaired by Conservative AM Keith Prince with members including Conservative AMs Steve O’Connell and Shaun Bailey.

The reality: The Hounslow Transport Strategy shows the high number of Chiswick residents who commute to work in central London.

The councillors do not say why they consider it “insensitive” for Chiswick residents to have the choice of a healthy and non-polluting journey to work by cycling.