Dr Will Norman, the Mayor of London’s Walking and Cycling Commissioner gave a presentation at Hounslow Cycling’s monthly meeting on 30th January at The Pilot on Wellesley Road, Chiswick.

After Will Norman’s presentation, he answered questions which had been sent to him in advance, followed by questions from the audience. 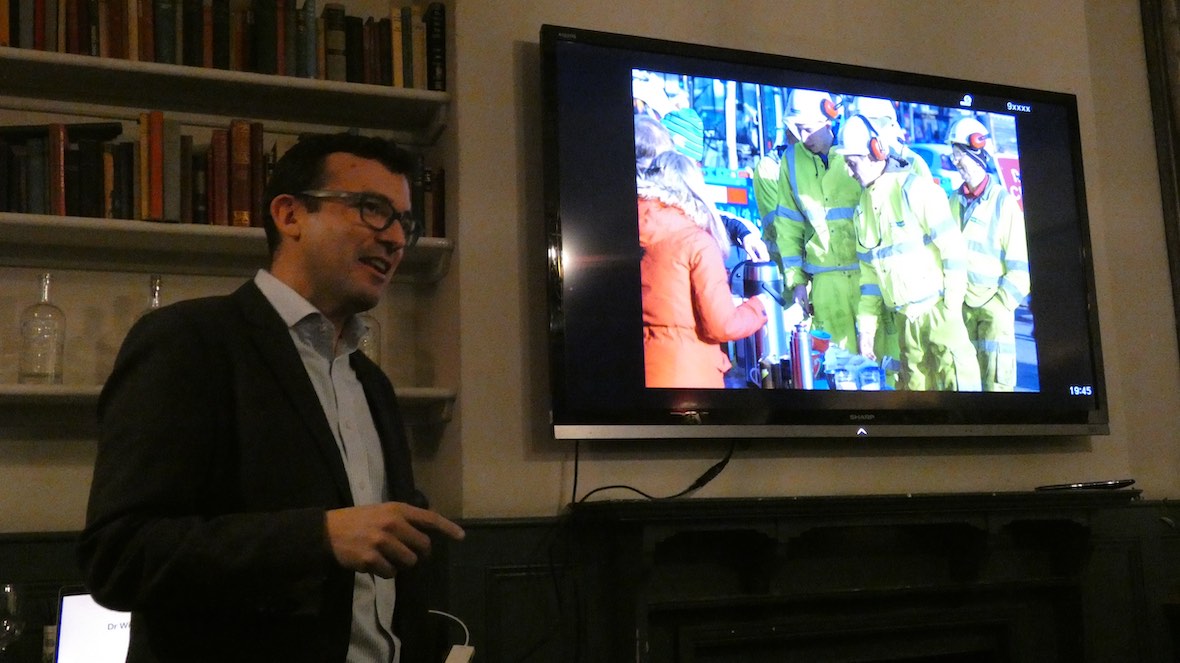 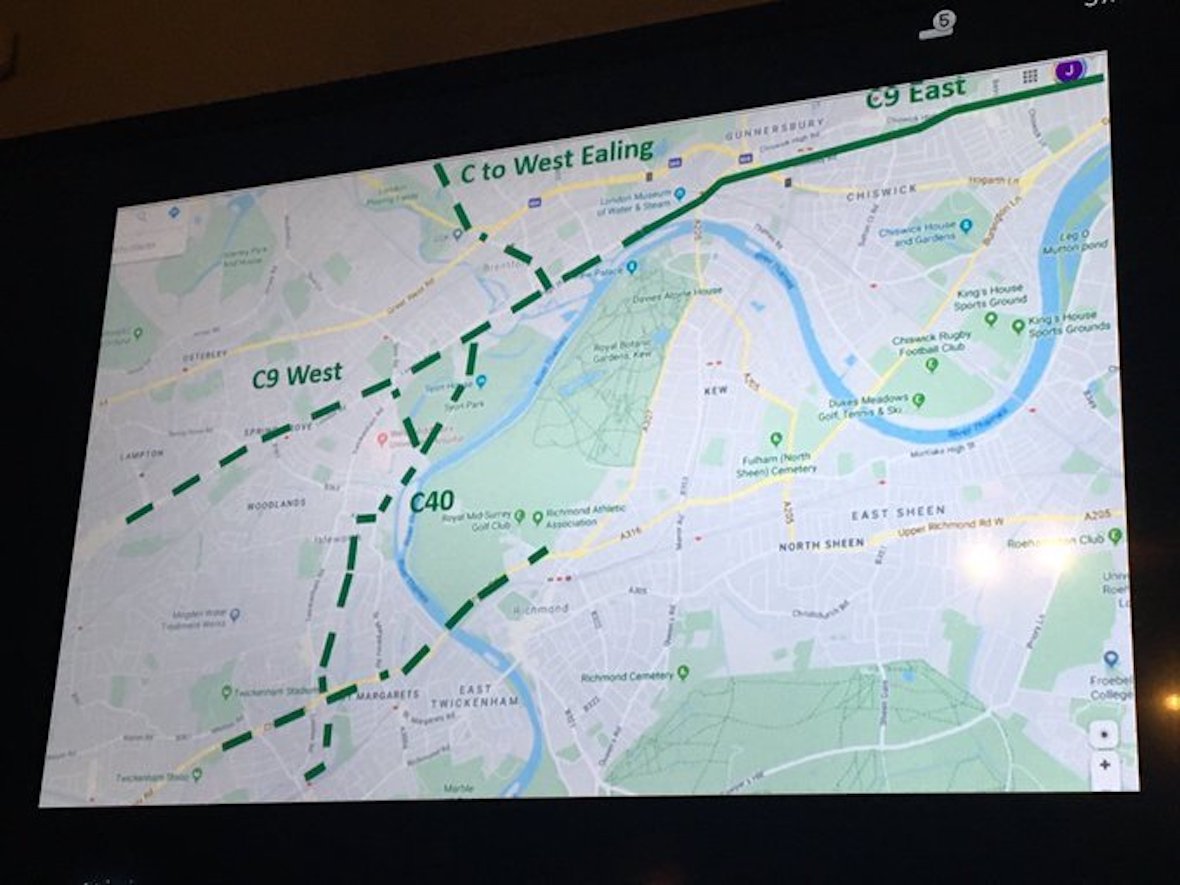 WN response: Boroughs bid for this programme. 18 currently funded, another round currently being assessed. Funding is awarded on the basis of quality and this includes deliverability. There are no blank cheques and project gates to get access to funding. TfL can withdraw funding.

Question: Our perception is that TfL refuses to consider anything that may affect capacity of major trunk roads. How can the severance created by these roads be reduced if TfL prioritise motor vehicle capacity above all else? Specific example: Sutton Court Road junction with A4. This will be the route to link S Chiswick Liveable Neighbourhoods scheme with Cycleway 9.

WN response: Felt this was unfair. There have been schemes on major roads, citing Euston Road, that had improved walking and cycling at the expense of motor vehicle capacity.

Question: How should TfL buses be part of Liveable Neighbourhoods?

WN response: Buses are essential. There may be 40,000 users on some major roads. If buses stop those will not all go on bikes or walk, lots will take Uber. Need to make sure bus colleagues work with him.

Cycleway Plans
Question: What is the next phase of other routes linking with Cycleway 9? (extension from Brentford to Hounslow, S Circular across Kew Bridge to Kew Road, other plans?)

WN response: Cycleway 9 extension from Brentford to Hounslow should be going to consultation in the autumn. He would like further extension to Heathrow. First orbital cycleways are starting, eg Wembley to Fulham, Hackney to Isle of Dogs, not just going into central London.

Question: Can you provide a high-level construction schedule for Cycleway 9?

WN response: No, contracts are being finalised at the moment.

Question: What is being done about Westminster and RBKC blocking cycleway plans in central London?

WN response: He wants to be collaborative but had quite difficult moments with these councils but will continue talking. Regarding Holland Park Avenue, RBKC didn’t want to do engagement before the consultation and had agreed to be neutral during consultation but then changed position. He felt this was wrong to commence consultation and then ignore those who had responded. They were revising proposals to further reduce the small number of trees lost and review loading and parking. “We can tweak, but I will not give up on roads where there are safety concerns.” citing fatality and “ghost bike” memorial still present at Notting Hill Gate.

The Future
Question: We’ve heard in two recent local consultations there was a disproportionately large number of responses from the over 60s and little response from the under 30s. How can TfL better hear the voice of younger people in the consultation process?

WN response: He challenged the people in the room (councillors, officers, members of the public) how they were engaging with young people rather than leaving it up to TfL.

Question: Views on possibility of road pricing being introduced in London?

Question: Number Plate recognition (ANPR) is mentioned as a way to implement road pricing and restricting vehicle access as part of traffic reduction . Views on balance between privacy and outcomes achieved?

WN response: cited direct vision HGVs which will be enforced by ANPR. From October HGVs need sensors to enter London. From 2027 no zero star safety rated trucks allowed into London. £550 per day fine, done via ANPR. Cited importance of enforcing speeding and close passes as this often addressed other issues, for example, an uninsured driver is 60% more likely to be involved in other crime. Cited his involvement with a recent “20mph junior speed watch” event and a car stopped was found to have drugs and weapons.
Questions from the audience

Question from Richmond resident: Richmond did a decent Liveable Neighbourhoods bid, but have no track record of deliverability. How do I get my borough over the line?

WN response: Track record not necessary. Jealousy of other borough’s achievements should see progress!
Question: Can you mandate that every construction site is checked by a “Michael Barrett” (TfL person who reviews access to walking and construction at construction sites) to ensure cycling can continue safely during building.

WN response: No, we don’t have enough resources to check every construction site in London.

Question from Hammersmith resident: Can you build a cycling/walking bridge over railway at Olympia?

WN response: Mayor only controls 5% of all London roads.

Question: What does climate emergency bring to issue? Will it lead to net zero?

WN response: Zeitgeist of emergency and air pollution anxiety. The upswelling is changing mentality. Boroughs are getting more ambitious. But at the moment there is no money at all from central government to do anything.

WN response: Boroughs are gradually upgrading. Fundamental challenge – don’t have resources for all, so need to prioritise.

Question: What about reducing speed limit to 15mph?

WN response: Currently no appetite for that, working to what is legally possible which is 20mph.

Question: Heathrow, we need a cycle lane through the site.

WN response: Agreed, 8km is a cycleable distance for most people and Heathrow perimeter is longer than that. 80% of the workforce don’t work in central terminals. Staff need permeable transport, and need it now however he has limited influence over Heathrow.

Question: In order to meet your targets by 2041, isn’t the closure of Hammersmith Bridge a godsend?

WN response: Not my remit, but it is encouraging more walking and cycling.

WN response: : It’s a big void, but we need to complete CW9, and A40. Priority to get current projects completed first. 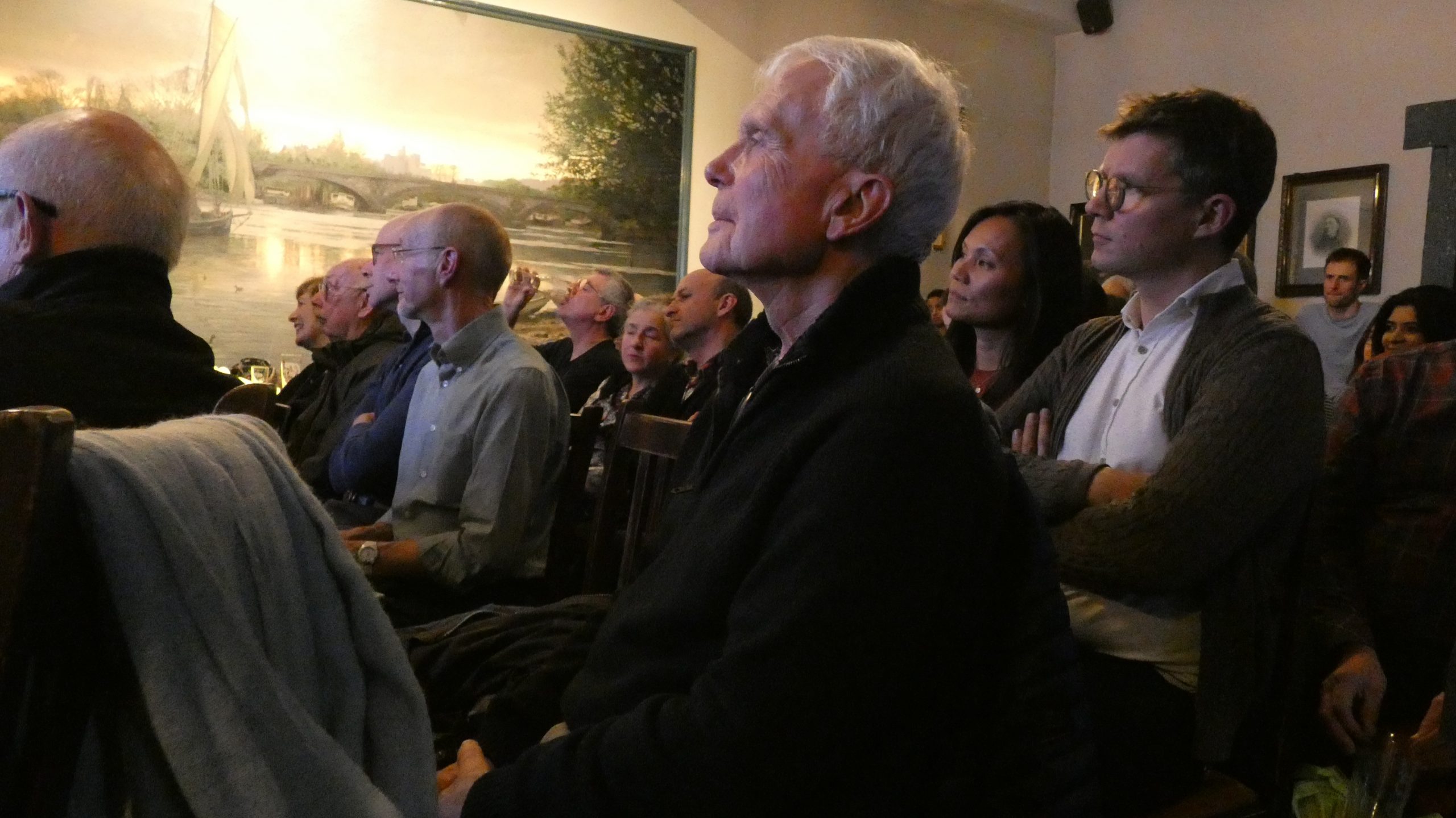 Other comments from audience

Cllr Steve Curran: agrees with the need to progress existing projects before taking on more.

Cllr Katherine Dunne: we need your support to push through changes, we are very committed to safe cycling and walking. On Monday draft climate emergency plan to be issued. Important to support your council when they are doing the right thing, not just complain when unhappy. Parking and business permit changes are currently out for consultation, please look and respond.